by Judy Thomson of the Garnet Lake Conservation Association

Garnet Lake, its northern end at Johnsburg and its southern end at Thurman, is not one of the largest lakes in the Adirondacks nor one of the best known. With three-quarters of the lake surrounded by “Forever Wild” state land, less than 50 families live on and around it, although visitors stop here for kayaking and canoeing.

In his new book, A Gem of the Adirondacks: Garnet Lake, author Candace O’Connor, whose family is one of those 50, says this lake is one of the most beautiful, with its undeveloped shoreline and view of majestic Crane Mountain. And in his foreword, conservationist Bill McKibben echoes that view, calling it: “Not the biggest, not the deepest, not the clearest lake that has ever existed. But the sweetest.

In the 19th century, Garnet Lake was Mill Creek Pond, where campers came to fish bullhead and pike. Loggers clear cut nearby forests and float logs down Mill Creek to the Hudson River. Then a series of dams at the north end deepened and enlarged the lake. Soon a few lakeside inns and resorts sprung up, attracting guests, and waves of buyers bought up properties and began building cabins.

In his book, O’Connor traces this history using archival documents, old newspaper accounts, family diaries, and interviews with residents, who told him some remarkable stories. Jay Putnam, a boy from the old Putnam farm in the 1940s, remembers acting as a tour guide for hikers up Crane Mountain – then back down the mountain in seven and a half minutes flat. Jim Mosher, a former lake resident, remembers saving a runaway dinghy piloted by Ethel Kennedy during the 1967 Derby. 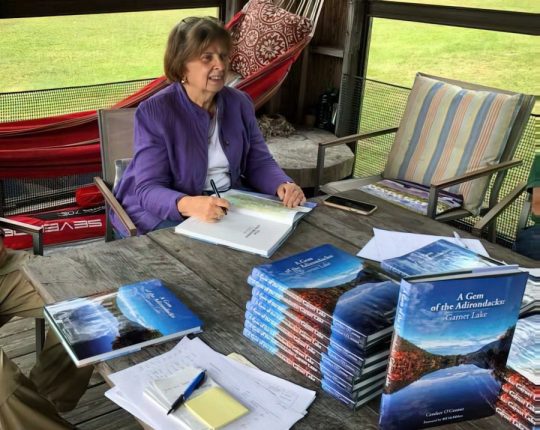 The book – hardcover and lavishly illustrated in color – also benefits from nearly 500 photos generously loaned to the project by Union College’s Adirondack Research Library, the Wild Center, photographer Bob Clark and others. All contemporary photos in the book were taken by longtime lake resident Bob Manning