It’s not often that you come across a book with a name like this: Forbidden in KL, Astro Boy rides the kingdom of Wave To Sky on a grasshopper. It’s a bite of a title, although it also carries its alternate name, Malaysia in fifteen postcards, which basically sums up what it is.

This “art book”, written by Ong Kar Jin, digital researcher, Simon Soon, university researcher, and Lim Sheau Yun, architectural researcher, presents snippets of the history of our country, with images and text from support for each decade from the 1880s to the present day. It has punched pages, so every picture can be torn like a postcard.

Most of the images are from the independent Malaysia Design Archive, with a few from private collections and public institutions. For example, the 1980s image is an ice cream wrapper, donated by Goh Ewe Huat (a former owner of an ice cream factory) to Malaysia Design Archive, and the 1880s image is a photo by a grasshopper swatter from the collection of the British Museum.

â€œSome of them can seem rather random. Which is quite good! We wanted to somewhat replicate the joy of sifting through an archive or a flea market and stumbling upon something wonderful. You can draw your own lines through history, â€says Ong.

The title of the book, of course, is a mishmash of some of these images and what they represent.

Some other highlights include a 1940s lottery ticket, an emergency-era British Malaysia ration card, a 1990s punk concert poster, and a screaming 2019 sculpture by artist Hoo Fan Chon. which is a nod to the infamous Raja Bomoh Sedunia Nujum VIP who made headlines with his coconut rituals to “find” the missing MH370 plane and later to “defend” Malaysia from nuclear weapons North Korean.

The book and postcard project titled “Banned In KL, Astro Boy Rides The Wave To Sky Kingdom On A Grasshopper” by Cloud Projects. Photo: Handout

Of course, titling a book Malaysia in fifteen postcards might be seen as a bold statement, Ong agrees.

â€œAfter all, how can we presume to only select 15 images that somehow represent the nation? Any attempt in this direction is doomed to exclude, to be open to debate, and indeed to be rather arbitrary.

â€œBut for many historians or storytellers, it’s very tempting to make it clear that these postcards somehow sum up each decade, with a ribbon on top. There is a desire to order, to order. make sense, categorize, “he says.

â€œBut the story is complicated. It can also be violent, in the way it can perpetuate narratives of hegemony and injustice or advance colonial ideas. Thus, the project of the book, in the choice of images and certainly of the perspective with which we choose to illuminate them, is to embrace this disorder and this arbitrariness.

“If history is to be so contrived, then let’s highlight at least one other way of looking at Malaysian history – whether through the lens of the little things (to tell the story of the Mahathir administration via a humble packaging of ice cream) or to consider the lower bellies (the dissent of punk rockers rebelling against the drumbeat of development) or those who have often been ignored (the unyielding gaze of a Malaise staring straight back at a camera colonial), â€he continues. 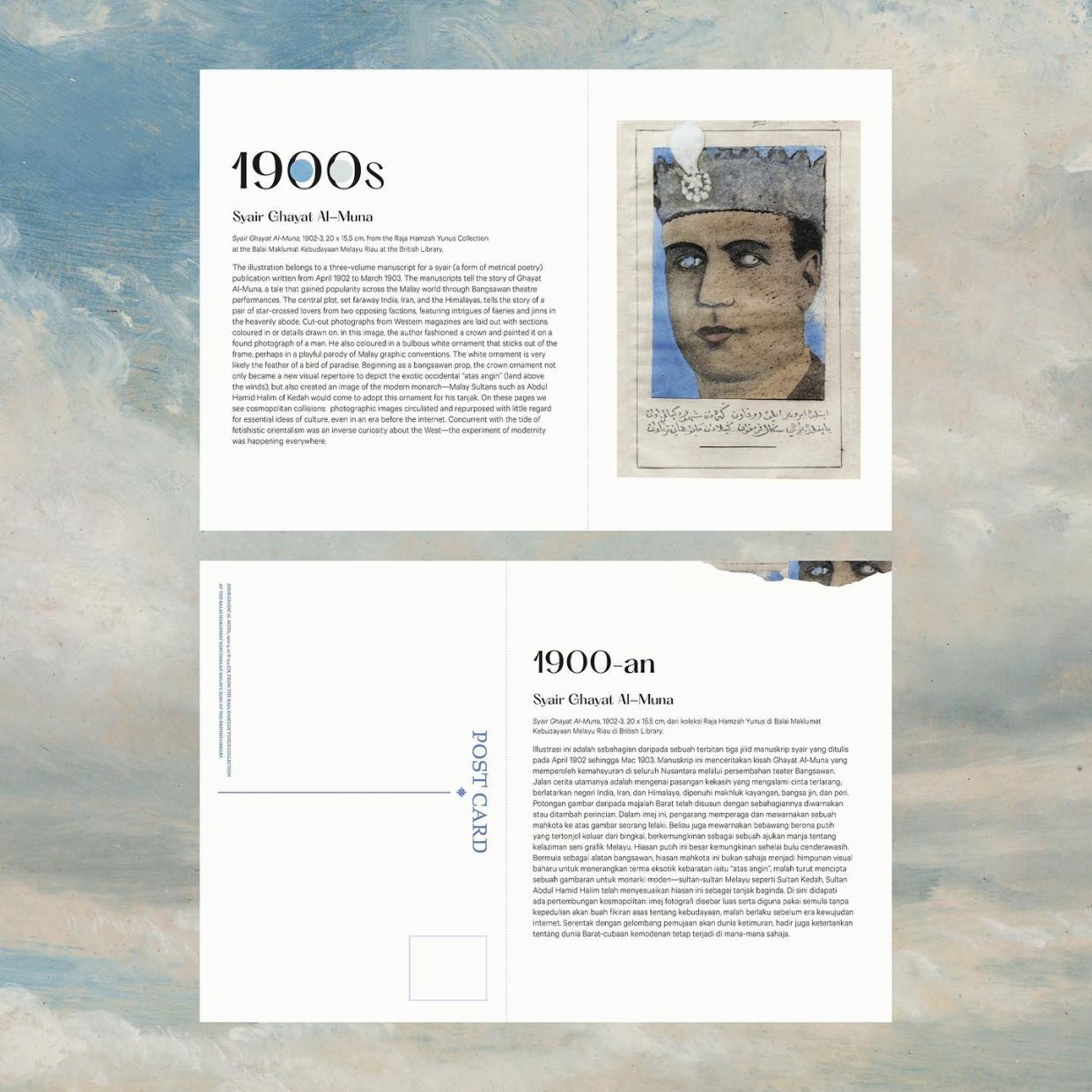 Each historic image is printed on punched pages which can be released and used as postcards or decorations; once ripped, fold the book and you have a smaller version of the book. Photo: Handout

He adds that the 15 postcards aren’t meant to be exhaustive or authoritative, but they hope this series highlights an alternate take on what each decade was like.

â€œA lot of Malaysians tend to see old pictures or things and get nostalgic, like ‘What a mess, see lah, we were so xyz harmony harmony blah blah’.

â€œBut it’s obviously a kind of pink-tinted lens. Instead of causing nostalgia, we hope our book provokes reflection, a pause to consider the realm of the possible, and a critical reflection on what more â€œofficialâ€ stories often leave out, and the cost of that.

â€œAn analogy I often think of is that the taller the building, the longer the shadow it casts. Monumental and â€œbigâ€ stories often obscure the little things that are often just as important. Malaysians continue to live in the shadow of the Twin Towers; we wanted to explore what was left in their shadow, â€he says.

Each image that appeared served as a prompt from which to generate intricate and interwoven stories. 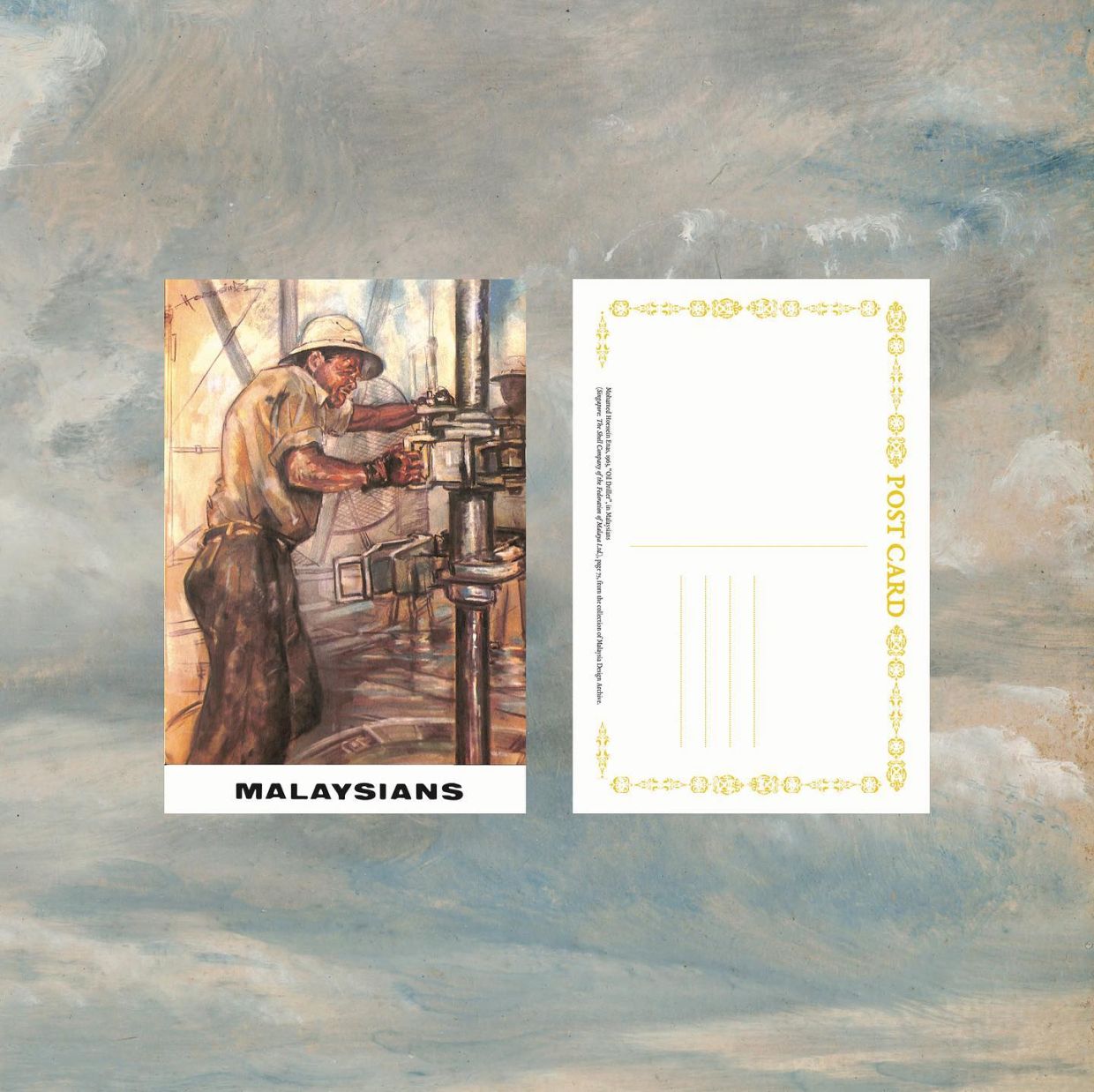 A postcard image from the historical book “Malaysians” by Mohamed Hoessein Enas, published in 1963. Photo: Handout

â€œAn example that I like to mention is ‘Malaysians’ by Mohamed Hoessein Enas, published in 1963, arguably the greatest portrait painter in the country. It features the most beautiful portraits of various Malaysians, from judges to hawkers. But in researching its publication emerges a very big political story: that of the Shell company which published the book and was deeply involved in pre-independence lobbying to preserve their oil rights in Malaysian waters, especially in the face of the encroachment of American competition in the form of Esso.

â€œSo it’s not just one story of this magnificent portrait, but through careful research we uncover a whole different story of politics, colonial interest and economic lobbying. I think it’s this winding journey of discovery and storytelling that is really fun and often unexpected, â€says Ong.

Malaysia in fifteen postcards, published by Cloud projects, is presented in English and Bahasa Malay. The BM translation is by Nadia Nasaruddin, with a design by Amanda Gayle.

No doubt history buffs, Malaysian fans and postcard collectors will appreciate this book, but it is designed to be accessible to a much wider audience.

â€œWe think about access in several ways. We believe in open access and copyleft practices, and that includes pirating our own book. This means that we are offering the PDF copy for free to everyone to download and keep forever.

â€œOf course, for those who can afford it, we also believe that a physical copy of the book is of great value. It’s a beautiful little book if I may say so myself and we want people to enjoy holding it, caressing it, seeing the beauty of the pictures and feeling that thrill and that happy coincidence of stumbling upon something. beautiful and unexpected, â€says Ong.

“Forbidden in KL, Astro Boy Rides Wave to Sky Kingdom on A Grasshopper: Malaysia in Fifteen Postcards” is currently available on Ilham Gallery and Illuminated books.